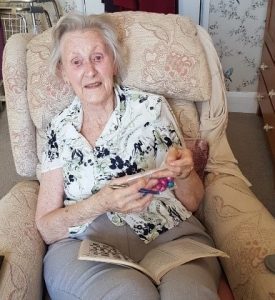 The 12th August marks the International Youth Day and while this annual celebration isn’t necessarily something you’d associate with Sundial Care Home, (although many of our family members may attest otherwise) the wisdom passed on by members of the Sundial family throughout their lives has guided fortunate generations of youth throughout years gone by.

Beryl Tasker, 89 years young, has played more than her fair share in raising the future generations in East Devon as she, along with a couple of friends ran the Woollbrook playgroup in Sidmouth during the late 1960s and 1970s.

Working a few mornings a week, she would lead children aged between 3 and 5. “Beryl would be involved in playing, doing puzzles, story time, singing and preparing craft activities for the children to do. She enjoyed it very much,” her daughter Lesley said of her time at the playgroup.

Playgroup’ could be described as somewhat disingenuous title for a schooling of such importance during this age period in a child’s development. Between the ages of 3 and 5, children will hit key milestones in speech, showing affection, behaviour, and movement. This learning that playgroup leaders support, builds the foundation blocks for all future learning and development. Children learn how to draw, ride bicycles, sing, dress and undress themselves; some of East Devon’s future artists, athletes, singers, and fashion designer’s inspiration may have started at playgroup with Beryl!

Insight into Beryl’s playgroup leadership can be gained from Lesley’s experience as her daughter. “She set boundaries but would also spoil the children too!”

‘Tea grandma’ as she was known for her tea drinking on visits to see Lesley and family, was also involved with the Sidmouth Art Society and was usually involved in their annual production. Ken, her husband would often work the lights for the show.

Beryl and Ken both live at Sundial Care Home in Tipton St. John, where they both still enjoy each other’s company. Creativity is something Beryl still has in abundance, as she still enjoys arts and crafts at the home alongside reading and completing crosswords.

In 2019, the United Nations, estimated that ‘more than half of all adolescents aged 6-14 lack basic reading and mathematical skills.’ These skills are first developed at pre-school and playgroups, and people who volunteer their time to teach and engage with people in these age groups, play a vital role in a young person’s development.

During the 60’s and 70’s a group of young people directly benefitted from the time and care Beryl and her colleagues put into them during their tender years. In a somewhat unconventional manner, this International Youth Day we dedicate to Beryl and all at Sundial, for the love, guidance and teaching that has inspired generations of young people whose life stories began in Devon.