Valentine’s Day: A Story of 69 Years of Love 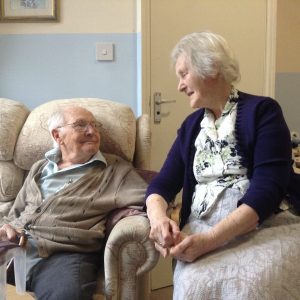 ‘Love is eternal’ is something you may hear certain romantics say. Certainly, Cupid, of classic mythology and the ancient roman god of all things love has survived the test of time. He remains a figurehead for the 14th of February in which we celebrate love, affection, and adoration for those we hold most dear or are hoping to swoon.

Ken & Beryl Tasker, who live together at Sundial Care Home, nr Sidmouth, are Sidmouth’s own symbol of longevity in love as they will soon be celebrating their 69th Wedding Anniversary.

Having met and become enchanted with each other at the church youth club, Ken would join Beryl and her family outings, including a holiday away to Sidmouth, the picturesque seaside town they would come to call home.

After enchantment and charm grew into spellbinding love, they were married in the Midlands, as Kenneth Tasker and Beryl Joan Robinson became the Mr & Mrs Tasker on the 14th June 1952 surrounded by family and friends at South Street Methodist Church, Harborne, Birmingham.

Joining Ken at the alter was his best man Albert Shaw, while his brother Brian and friend Norman Burrows were his other groomsman. Beryl’s sister Audrey Gladys Robinson and her best friend Audrey Russell were the two bridesmaids.

After a couple of years of marital bliss, they were blessed by the white stork with two children, Martin and Lesley. Together Ken & Beryl spent much of their spare time committed to a cause close to their hearts. Martin lived with Muscular Dystrophy, and Ken & Beryl would help organise and attend fundraising events for the progressive condition. Tragically, Martin’s life journey came to an end as he passed away at the tender age of 13.

Having spent their young family life in Birmingham, they moved to Sidmouth in 1967 when Ken started a new job at the Shands in Axminster. In Devon, the couple threw themselves into local life as Beryl would sing at Sidmouth Arts Club, while Ken helped with the lights on the productions.

Each year they celebrated anniversaries by exchanging cards and sharing romantic meals together. The special anniversaries would be marked with grand parties, surrounded by family.  Even after Lesley had flown the roost, herself struck by Cupid’s arrow and a family of her own, Ken & Beryl, still continued to dine out together, in their favourite hotels in Sidmouth.

In January 2019, Ken had been living at a neighbouring care home in Sidmouth when he came to visit Beryl at her new home, only a few miles north of Sidmouth, the town they’ve called home for 53 years. Unwilling to spend another moment away from his beloved wife he insisted he join her at Sundial.

Much to their delight, the team at Sundial were ecstatic to reunite the couple at the home and helped Ken move in, just in time for supper! The loving couple have been together ever since and have admired the stunning views overlooking the Harpford and Venn Ottery countryside from their private lounge.

Last year Ken & Beryl celebrated Valentine’s Day in their traditional fashion with an extravagant lunch with floral arrangements adorning the table and glasses of fizz flowing.

Ken & Beryl will be celebrating this Valentine’s Day in much the same way as they have spent the previous 68 together as a couple, gazing into each other’s eyes over a romantic Valentine’s Day meal.

Their adoration for each other after 68 years is something we can all behold and appreciate as a true symbol of unfettered eternal love. A real triumph for the romanticists among us, thank you Ken & Beryl for the hope of long-lasting love.

To read more news or blogs from Sundial click here. 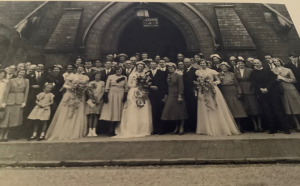